Finally, after waiting six months, Getat.ru received the «legendary» Seagull 1963 for testing. Although, strictly speaking, this remake isn’t made by Seagull.

At this point, it’s absolutely necessary to tell the whole story. As it’s known, the model has been released since the year 1963. At the end of 2000 Seagull released something like a remake; those watches didn’t have a transparent window in the back. This was a limited edition.  After this, some sellers started making their own «version» of the 1963 model, in particular, some shops still sell either the opaque or the transparent version, on which there are various inscriptions written in red. These watches aren’t made by Seagull. And they cost, about $350-400 by the way.

Some Chinese guy named Thomas, the way he’s called on every western watch forum, worked on a Seagull factory before but some years ago he left and started selling his varied homages. About a year ago he also released the 1963 with sapphire glass, which was used among fans, even if what they really wanted was the watches with the original acrylic glass.

Thomas accepted the case and in January 2013 he released a model with acrylic glass. This model completely copied the original, but it was personally built by Thomas so he was the one to give its technical guarantee. But let’s remember, Seagull to that watch, with the exception of the mechanism and the parts, has no official relations.

Considering the wants of the market, Thomas released several variations of the model 1963 – one with enlarged 42 mm housing (instead of 38 mm like in the original). And not only with a cream dial, but other two types as well.

We, understandably, got interested by the classics. Because of this we ordered two models with a cream dial with different diameters of 38 and 42 mm.

And now the watches arrived.

The watch arrived in a packaging imitating wood. On it, something’s  written in Chinese and «1963». The box, by the way, is similar to those that Shanghai puts on its original models. The watch itself is marvelous! The case is excellently made and polished. The dial is perfect, all the numbers are ideally even. The glass deserves the best marks. It is domed, high and perhaps quite thick. The glass, along with the cream dial gives the watch a sense of timelessness, Vintage. This is a real retro clock, only made recently. A great thing!

There probably isn’t an anti-reflection coating, so with the glare its hard to photograph. But it’s worth it. 🙂 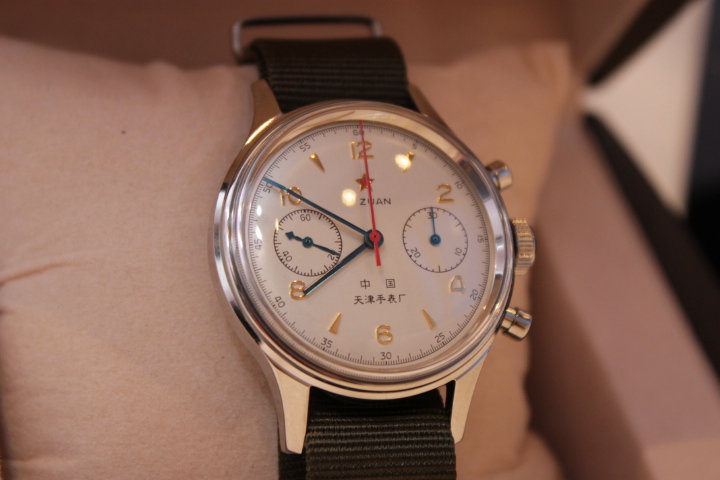 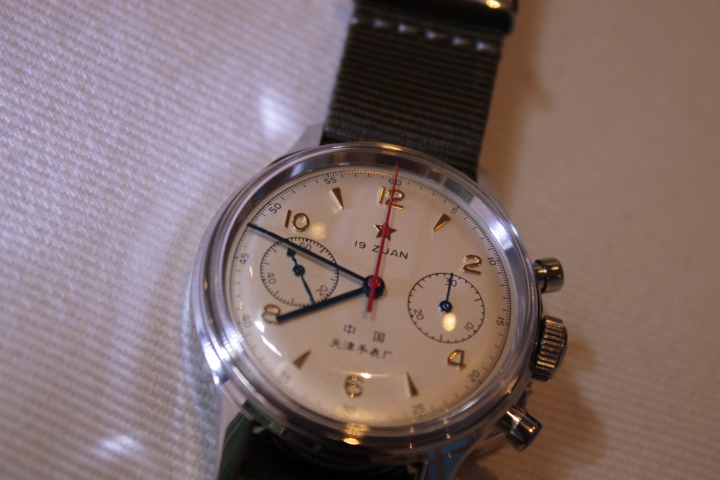 Fairly loud, but as always beautiful (the back cover — its transparent!). 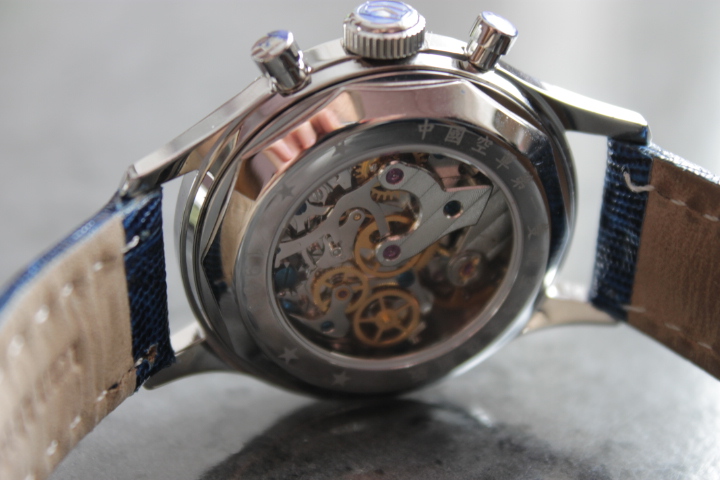 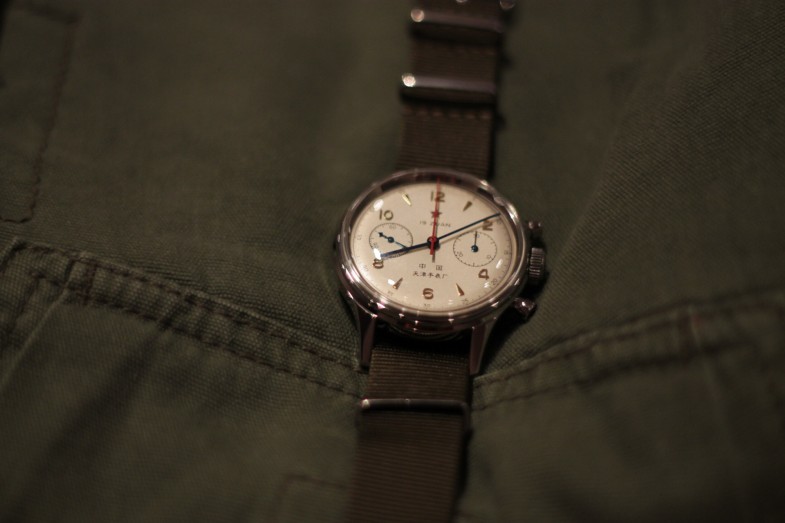 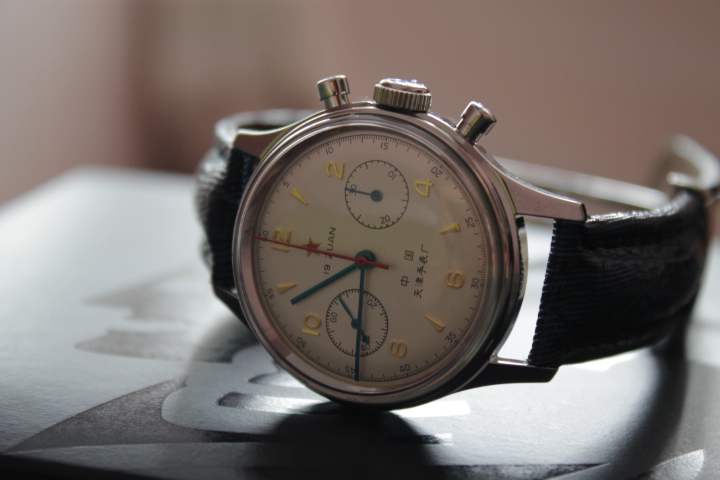 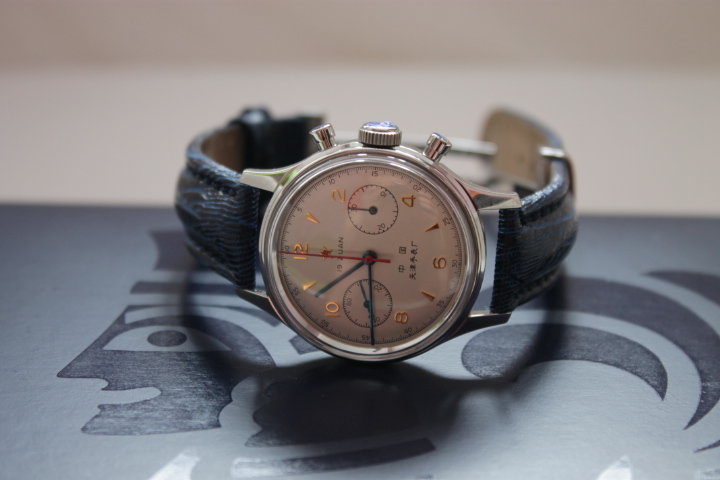 The hand goes very smoothly. The watch is accurate — it is likely that Thomas sets the clocks himself. The chronograph buttons work well and there weren’t any disruptions.

Strap Included — a cheap and short NATO, as always with the Chinese. Not all that good, so I temporary changed it to a blue one.

Oh yeah, and do you know how much is it with the delivery? $200. For a mechanical chronograph watch.

Here everything is different. The case is different, even the name of the Master is on the dial. The seconds hand switched places, in comparison to its younger sibling. The mechanism is the same, the dial is the same, the only difference are the signatures (this isn’t a remake), the hands are the same.  This means that the minute hand doesn’t reach the divisions properly. It is a small thing, but not very aesthetically pleasing.

Overall, the watch looks good, considering the fact that the 38th is considered a classic standard. That means that the increase of the diameter didn’t ruin the design.  Still in our times, a small watch doesn’t fit for every hand and so we have to deal with amplification. 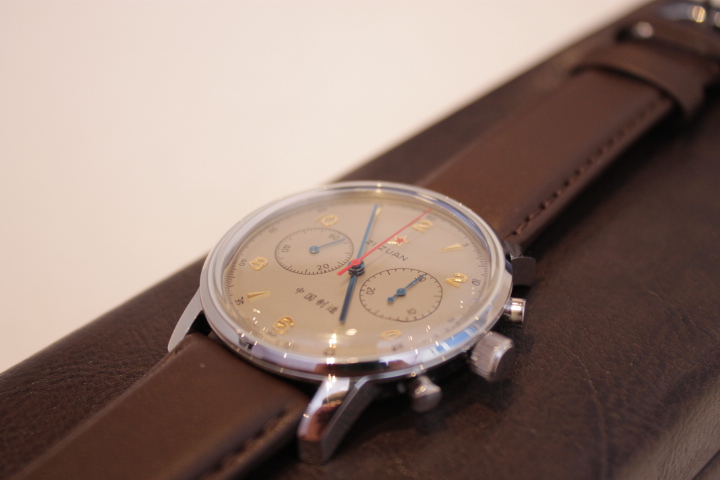 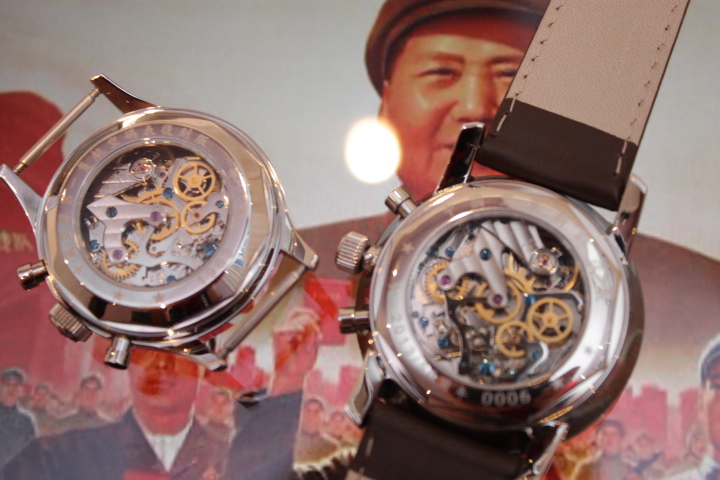 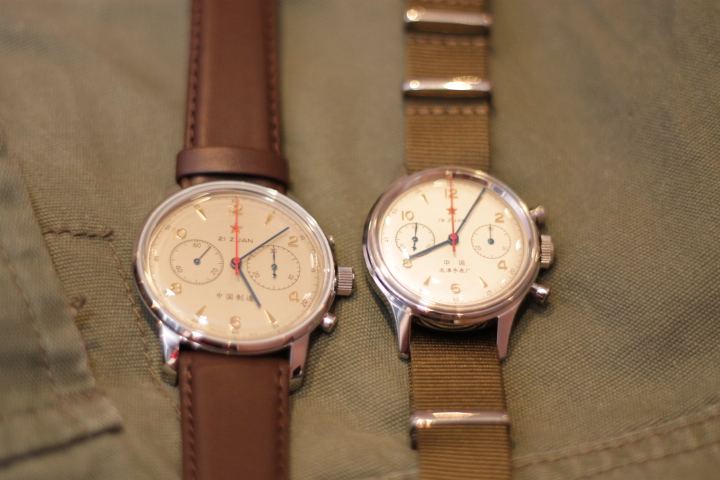 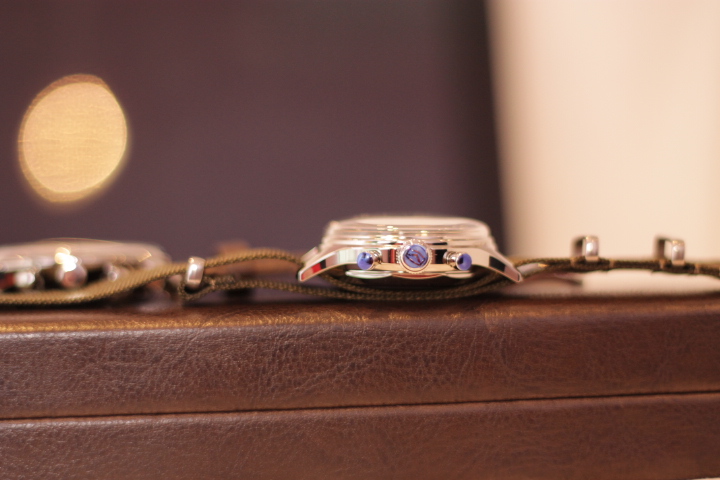 The main difference — it’s the glass. It’s also from acrylic, it’s convex but not much. Yes, it’s understandable, it’s because of the size of the watch. But the feeling is already different. There isn’t that Vintage effect and comfort that the 38′ have. The watch is more modern, especially if you have a dial that isn’t creme. Even so, they’re good.

In the assortment there is a brown leather strap. It doesn’t look too good with this watch. Because of that we placed a green NATO strap and the watch looked better.

Another difference: the crown is flatter and not as high. The buttons aren’t as precise as the 38′ model. However, the mechanism here is perfect. The price $220. 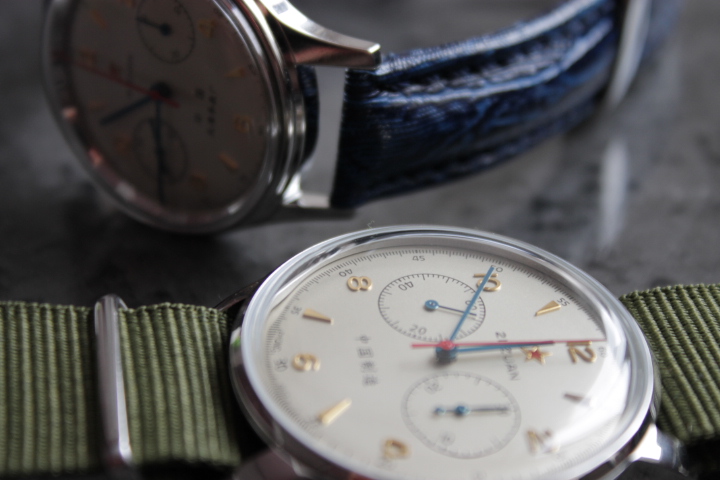 The watch is magical, especially the model in the 38 mm case. They simply should be in a collection. The 42′ fits better for everyday wear. The price for these watches is the barest minimum. You won’t find anything like this for the same money anywhere else. Especially when you consider the quality.

Yes, there are models of Chinese chronographs like Shaeffer in the same price range on Ibee, but what is their quality?  A Chronograph with the same mechanism from Magrette costs about 2,5 times more ($500). 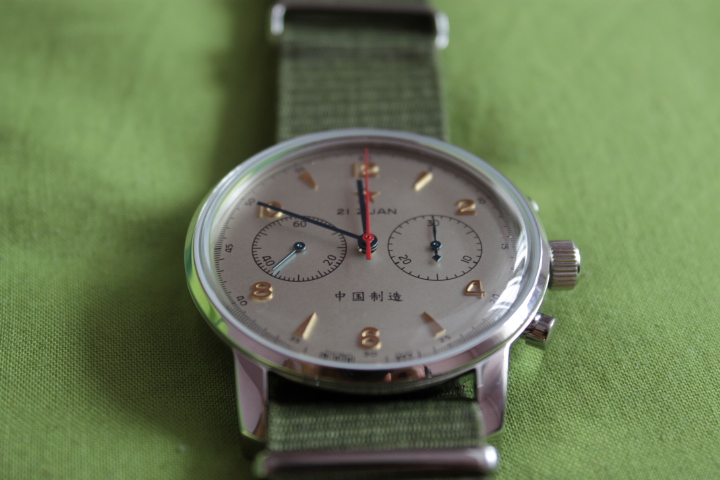 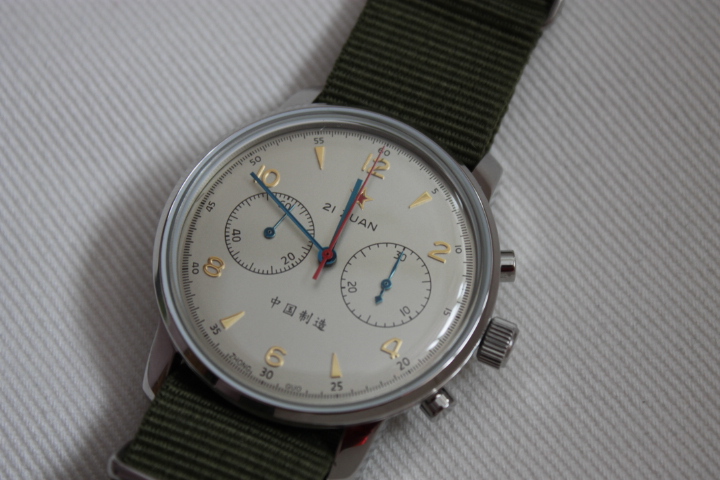 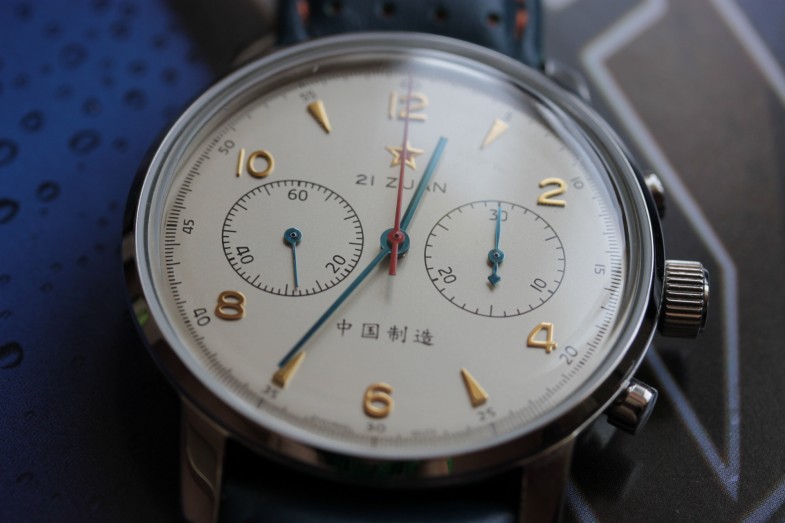 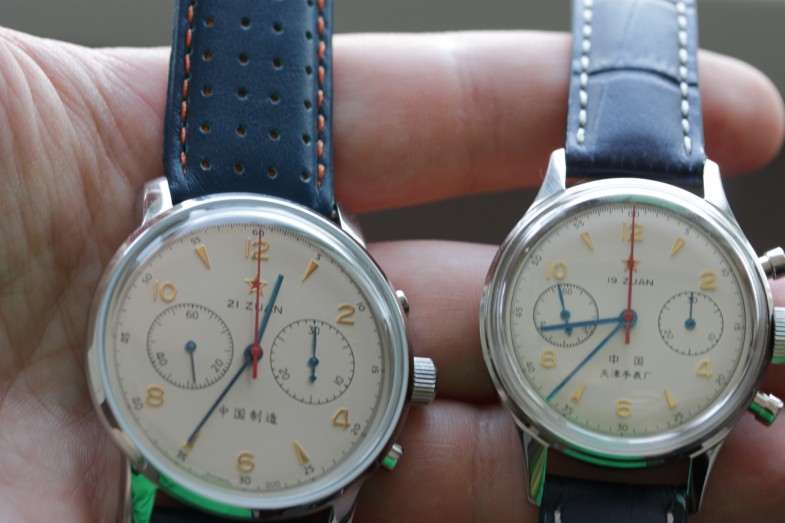 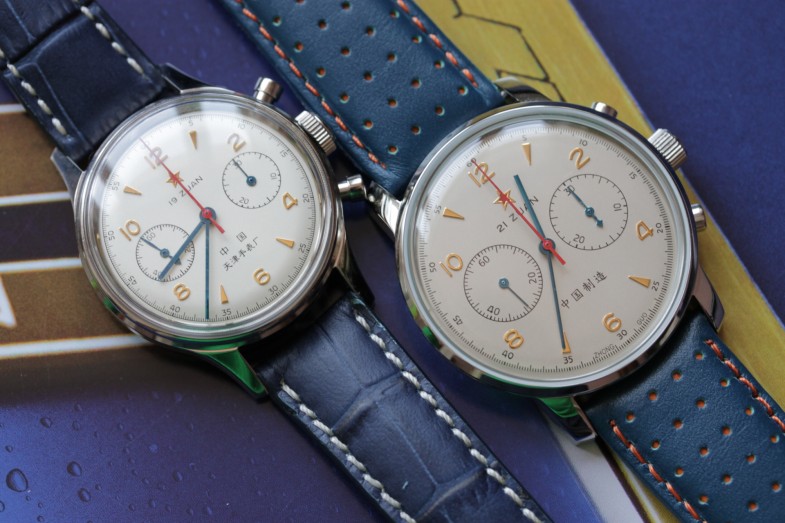 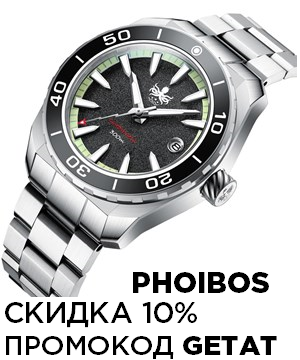 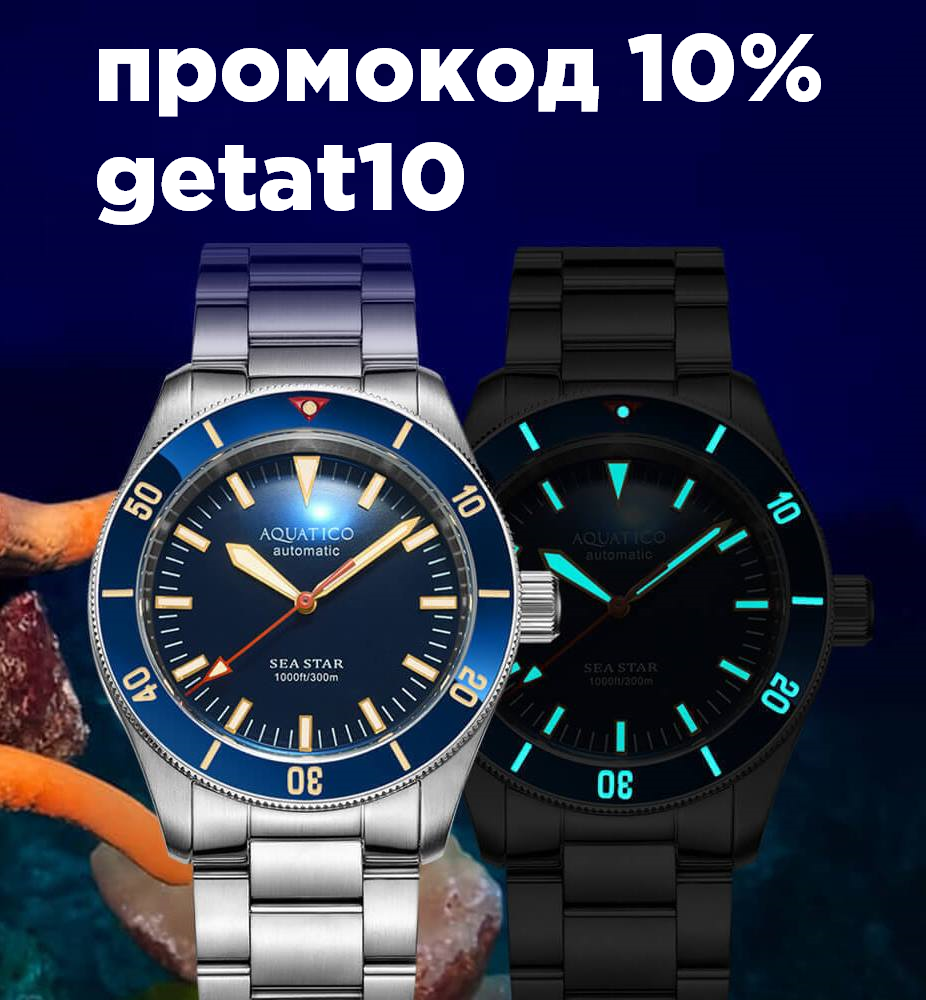 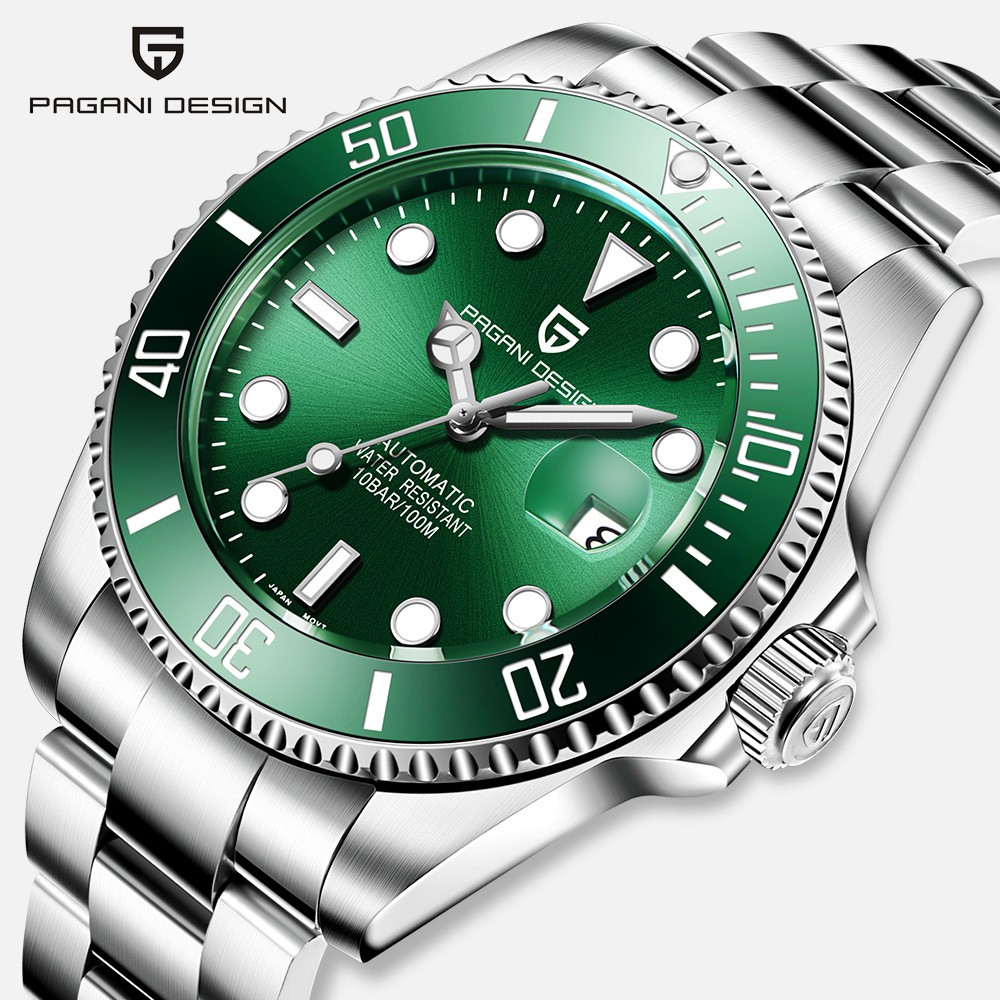